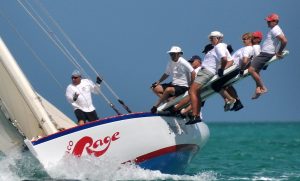 The 43rd annual Abaco Regatta event took place place from June 23rd to July 3. It was ten days full of excitement as racers from all over came to different parts of Abaco to sail the deep blue seas. Impacting the entire island of Abaco, 1,400 people turn out to celebrate, spectate and party.

The Abacos are one of the world’s top boating and sailing destinations and have been The Bahamas’ boating capital since colonial times. Starting in South Abaco and ending in North Abaco, it gives visitors a chance to experience different cays of the island.

The tradition of building boats by hand (without plans) has been passed down for centuries in The Abacos. Some residents of Man-O-War Cay, known as the islands’ boat-building center, still practice that trade, and are renowned for their superior workmanship.

Representing HG Christie was our Estate Agents, Dwayne Wallas and John Pinder. They sailed on the beautiful and infamous 35.5 foot yacht, Balamena II. 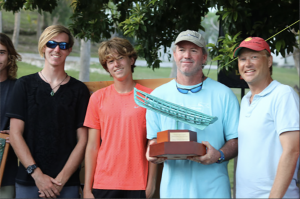 This year the winner of the Regatta, Jeff Gale a.k.a. Bent Toe, received the William McPherson Christie Memorial Trophy. HG Christie’s late president, William Christie aka Peter, was well known for his love of sailing. As a former Commodore of the Royal Nassau Sailing Club, he first set sail in his first regatta in 1976 and his last in 2016.

The trophy was built by local professional sculpture, Pete Johnston of Johnston Studios in Little Harbour and was designed by Peter’s loving family.

If you’re a beginner or have never raced before, certain events cater to those wanting to participate for the first time. It’s quite the sight to behold as you watch competitors on their boats, some manning the sails and some just simply there to add weight to keep the boat steady.

Be sure to check it out next year as the committee has already started planning for it!